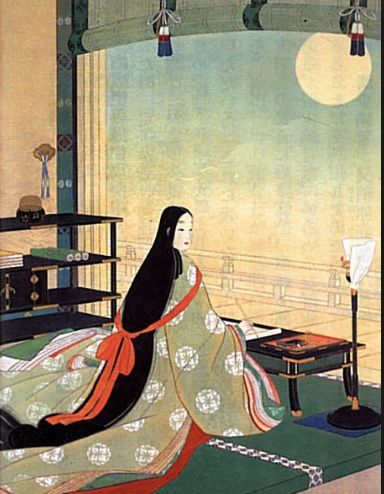 A memory of Tsukino

It is the first month of winter and, even though there is no snow, it is already bitingly cold. Kaisei feels particularly melancholic this time of year because it always reminds him of his lost love Tsukino who died in childbirth along with their daughter. Since she was the Takumi at the time, and he her assistant, their relationship was illicit and so was kept hidden. When he assumed the office at her death he felt a great deal of guilt because he was, in a fashion, directly responsible for her death. His parents wanted him to pursue another career but he chose instead to be Takumi partly out of a sense of duty, and partly out of a sense of obligation both to the Tensai Clan and to Tsukino herself.

Keiko, ever reasonable, ever rational, and ever reliable had to address him by his office twice and finally call him by his name before he snapped out of his reverie. The Takumi and his secretary were discussing the arrangements that all the officers had to leave behind when they left to attend the Shogun’s Winter Court. The invitation made it clear that all the officers of all the clans had to attend and it was worded in such a way that, no matter how creatively Kaisei tried to interpret the words, there was no way around it. This told him one thing though: the Takumi of the Shogun was not one to be trifled with; that one was almost as good as he is.

What the officers have set up so far is that in their absence Keiko will oversee the office of the Takumi, Setsuna will collect the reports of the agents of the Oniwaban, and Daichi will assist Kazuhira in managing the ashigeru of the clan. Soichiro leaves Misako in his stead as Karo. Soichiro calls the officers for a briefing of what to expect at the Winter Court and has Misako attend. She shows up in older-style kimono, similar to what Lady Kiko prefers to wear. It seems that the courts of seven clans will be in attendance and Soichiro points out (perhaps needlessly) that everyone there will be falling over themselves trying to outdo each other. The old man decrees that Kiko and little Natsumi will perform their dance on behalf of the Tensai, and Kaisei follow up with something impressive and amusing.

A few items of note are brought up at the close of the meeting: snow is forecast to be heavy this year but will not fall until the third week, Akari’s wound has finally healed, Takeshi found out that Inari has gone into hibernation, and the spy network of the Oniwaban has discovered that the disastrous charge up Hieiyama was carried out on a prediction of success by the Onmyouji of the Nohebi Clan; said Onmyouji has since committed seppuku.

As the court continues to prepare for the Winter Court, Kaisei asks Akiteru to dig up any dirt he can on the Takumi of the Nohebi and send out agents among the settlements along the shoreline to look for and spy on any Portuguese activity. The Takumi of the Tensai wants to know what the foreigners are up to and, more importantly, how they are reacting to what has happened to their collaborators. The Oniwaban agrees but seems distracted. After hurriedly issuing the orders, Akiteru excuses himself. Realizing what is going on with their comrade and friend, Kaisei and Takeshi follow. “I want to know what they’re up to and how they’re reacting!”